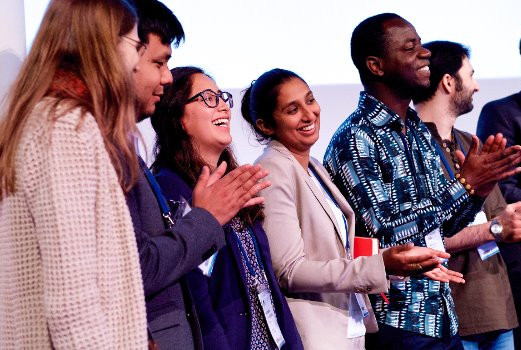 A weekend in October (15-17.10.2017), on the side of the 9th World Health Summit (WHS) I attended a hackathon called Hacking Global Health. We were nearly 40 people, in about 20 teams, and each team had to pitch an idea in 2 minutes. The only constraint on the ideas was that it had to do with improving health in poor urban areas. The trick was that only 8 of these teams were supposed to go to the “next” round and develop those ideas for the final pitch. But that was supposed to happen organically, without any interference from the judges or organizers. This meant that we had around 15 minutes or so, to form 8 teams on our own. The organizers, however, tried to push people with different backgrounds into the same teams, such that each team has all the required skills.

This is how I ended up in a team which needed somebody with “IT” background. They were people from two different teams, one with a focus on malaria mosquito traps, the other focusing on plague carrying rats. So I abandoned my idea, and we joined forces to come up with something. A bit later two more joined us with a business background.

After merging two of the ideas, we came up with a platform to educate people and improve their situation regarding vector borne diseases. It was a fantastic experience for me, since I didn’t even know this meaning of the word “vector” beforehand. Our team was fantastically open about the ideas, and that’s why we ended up with an idea which was none of the original ones, but one covering two of the original ideas. The final pitch was so different from any of the original pitches, that we had to resubmit a pitch form to put in the list of final pitches.

At the end, according to the judges, it was a clear and easy decision to choose our team as the winning team, for which we’re really proud.

Here’s an overview of the ecosystem around the idea:

And the interface of the solution would resemble:

And here‘s the presentation, the result of two hard working days.

After the hackathon, we presented the idea at the conference itself, and a few days later at a German African health collaboration conference. A few months later we were invited to present the idea during a German Health Partnership meeting having quite a few key players of healthcare in Germany present. Unfortunately we never got a proper backing from the public sector, and the idea more or less died. I hope someone revives it some day!